Originally from the South Jersey Times
By Phil Davis

WEST DEPTFORD TWP. — The Hessian Woods Girls Scouts brought a taste of everyone’s favorite fall holiday in the middle of spring for their 27th annual “Girl Scout Camporee” at Soupy Island on Saturday.

The event brings hundreds of girl scouts, parents and grandparents to Soupy Island each year for a three-day fun-filled weekend with games, arts and crafts and a parade all on the weekend’s to-do list. This year, the event was nicknamed "Camp-O-Ween" in celebration of the numerous Halloween themed activities that will take place throughout the weekend.

Running from Friday to Sunday, the girls, aged 5 to 18 years old, participated in activities like creating slime at the science station to creating scarecrows and eventually culminating in the costume parade to keep in line with this year’s Halloween theme.

Dawn Christman has been helping organize the event since 1998. Her two daughters, aged 20 and 23 now, grew up in the Girl Scouts themselves and she continued to be involved in the organization even after the two grew up.

"What keeps me coming back is... All it takes is one girl to smile and say thank you,” said Christman.

Christman praised the event for its sense of community togetherness, with West Deptford Boy Scouts Troop 9 along with other adult volunteers aiding the event by cooking the meals for the girl scouts in attendance.

She said she still loves the event because it gives parents an opportunity to bond with their daughters and granddaughters they might not get otherwise.

“Usually, when you go camping with your daughters, you don’t get to relax,” said Christman.

She said she enjoys the event and being involved in the organization in general because she see parents teaching scouts things that she might not be able to teach them herself like horseback riding and various craft projects.

“It’s like a family,” said Christman. “It teaches you to be leaders.” 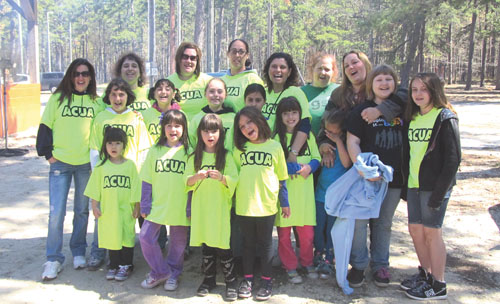