JAMESBURG — For one local Girl Scout, when it came to working on earning her Gold Award, the highest honor a Girl Scout can be awarded, it was more personal and about saving lives than just earning her award.

Jenna LeBrun, a senior at Monroe Township High School, held a Blood Drive and set up a table to explain the ways people can become an organ donor at the Jamesburg First Aid Squad for her Girl Scout Award project this past Friday.

She is also a cadet member at the first aid squad. Her dad, Robert LeBrun, is a commissioner at Monroe Township Fire District #1.

According to Jenna, a total of 40 donors came out to support here and “help save a life.” Jenna teamed up with the New York Blood Center who provided the collection services.

According to Jenna, her inspiration came from a family friend, Ryan Miller, 17, who went to the doctor because he wasn’t feeling well and discovered an enlarged heart. ”He wasn't feeling good one day,” Jenna said. “His mom took him to the doctor and they sent him to get a chest x-ray. (The doctors) thought he had pneumonia and when he got his chest x-ray (back they discovered) that his heart had enlarged a lot. I think it was his left ventricle and so he had to go right away to the hospital.”

According to Jenna, he then saw a cardiologist and he was diagnosed with hypertrophic cardiomyopathy.

”He went to go get a defibrillator put in him because his heart just didn't work,” Jenna said. “He was put on top of the transplant list. He was on the list for a month.”

Jenna said she does not want to see others be in the same situation as she had to watch her friend go through so she is now advocating for people to become a donor as her second part of the Gold Award project.

”Since he needed an organ, this is what inspired me to focus on organ donation because he was waiting for a month and he was on the top (of the list) for the entire Tri-State area,” Jenna said. “It still took a month to find a match for him. I figure the more donors there are, the less waiting for people that need one now.”

According to Jenna, Ryan received his heart and recently celebrated his “fifth new birthday” on Jan. 2 when he turned 21 years-old.

In addition, Jenna would like to see the schools start working a new act that was passed through the New Jersey legislature called the “New Jersey’s Hero Act.”

”I want to work with the school to set up in the curriculum education on organ donation,” Jenna said. “You have to include in the High School grades 9 through 12.”

According to the state’s website, the New Jersey Hero Act was enacted on July 22, 2008. Residents have the right to register as a organ and tissue donor upon getting or renewing their driver’s licenses, and with the issuing of state identification cards, according to the act.

In addition, beginning with the 2009-2010 school year, each public institution of higher education in the state will be required to provide information to its students, either through student health services or as part of the curriculum, according to the website.

The decision to be an organ and tissue donor can make a difference in as many as 50 lives throughout New Jersey and across the nation, according to the state. Right now, tens of thousands of people are awaiting life-saving organ transplants, while thousands more are in need of tissue and corneal transplants.

The shortage of donors is so severe that every day 18 people die waiting for organs that could have saved their lives. More than 4,500 New Jerseyans are currently waiting for organs and tissue, according to the websitewww.donatelifenj.org.

According to Jenna, the three ways you can become an organ donor are; sign up at the Motor Vehicle Commission when you apply for or renew your driver’s license or ID, register online at www.njsharingnetwork.org directly or through Facebook, or through a paper registration.

Christa Bell of Helmetta stopped by to donate blood and was impressed at the awareness that someone Jenna’s age is raising on such an important issue.

”I think it is a great thing Jenna is doing with the donor program,” said Ms. Bell. “I am also an organ donor." According to Ms. Bell, she checked it off on her driver’s license from the moment the law was introduced.

”Not only does Jenna understand that this is a life saving event all around, she is doing this for her Gold Award,” Ms. Bell added. “It was so great to hear a young person showing dedication and leadership. I hope others follow her lead and walk away enriched by her efforts.”

As of now, Jenna has completed 76 hours toward her award, which requires a total of 90 hours to complete. Jenna has been in scouting since she joined in first grade and became a Brownie.

”I chose an issue that is important to me,” Jenna said. “It needs to have a lasting legacy in the community. I plan to make some sort of video, kind of like a Public Service Announcement and also a brochure type thing with information.”

According to Jenna, her goal is to complete her service time by April in time for the Gold Award Ceremony in June.

In order to do that she must complete the last 14 hours and submit her paperwork to the Girl Scouts of Central and Southern New Jersey Council with the details of her project, pictures, copies of the signs she made and everything else, to prove she meets the requirements.

Originally appeared in the Sentinel on February 28. 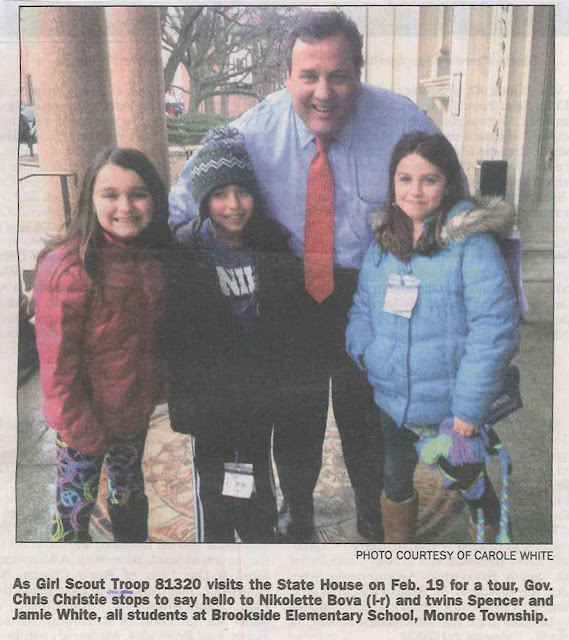