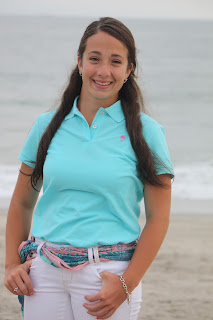 The summer camp and after-school programs at Habitat for Humanity exist to help children with their homework and take care of them during the day while their parents are at work. Lexi was originally interested in the project because she enjoys working with children and has been actively involved in sports since she was four. She first saw the opportunity to work with these children at the center when she visited with her troop leader. Lexi has been a Girl Scout since she was in first grade and has completed all of her awards, Bronze, Silver, and Gold Awards, with children being her main focus. She has also received the Presidential Service Award twice while working on her Girl Scout projects.

Lexi financed her project through profits from her troop fundraisers, her own money and donations from her family members. “The idea for creating Gym Games for the center came from visiting the center and from my love of sports,” Lexi says. “Since I love working with children, I immediately saw the opportunity. I thought that the kids needed some type of break from their work every once in a while and that gym equipment and games would be the perfect way to do this and keep them active.”

The Gym Games project began with the summer program last year to first introduce the games, and was then completed this past summer and fall with bringing in the equipment and playing the games together. The primary goal of Gym Games was to educate young children on the numerous ways to stay active and healthy in order to prevent childhood obesity rates from increasing and to give the children a more enjoyable place to be. Lexi planned the whole program, designing lesson plans for the games she played each day that she went in, purchasing the equipment for the children to use and working to teach them how to each game as a group.

The children learned how to play the games by working well with one another and how to stay healthy. “All of the kids had a positive attitude about exercising after I came in,” Lexi said. “They all learned how to express their feelings through sports and exercise and that was really great to see them do.” The children practiced all of their newly acquired skills by playing indoor and outdoor games with and without equipment to enhance their motor skills and to enjoy the company of their peers. The equipment for all of the games was then stored in a closet outside of the classroom at Habitat for Humanity so that the children had access to it whenever they liked.

“It was a very rewarding experience to see how all of the children grew to enjoy getting outside to stay active. As soon as I walked in, it immediately brought smiles to their faces and made them finish their work even faster in order to be able to play,” says Lexi. “I knew going into it that it would be a lot of work and would take up a lot of time, but I know that it definitely paid off for everyone involved.” In order to be sure that the project would be sustainable, Lexi created instructional cards and a video which described how to play all of the games, step-by-step, and gave examples of other children playing the games as well.

“My goal is to come back next year and see more children involved in the program to help it grow, but also to see the children more excited about knowing the games and being able to have the older kids teach them to the younger kids,” Lexi explains. “This would make the center more of a place where kids look forward to going and I would definitely go back to work with all of them again!”