South Brunswick Patch - By Davy James February 18, 2012
Vittoria, 13, has sold over 2,000 boxes of Girl Scout cookies in the last two years through hard work and dedication. 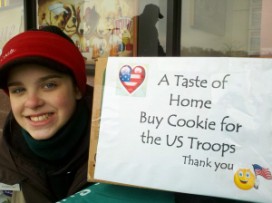 It's a magical time of year for cookie lovers. A time of Thin Mints, Shortbreads, Caramel deLites, Peanut Butter Patties, Lemonades, Thanks-A-Lots, and Shout-Outs. Girl Scout Cookie season.
But for one scout from South Brunswick, this time of year is pure business. Vittoria, of Dayton, knows just a bit about selling cookies.  She should after having sold over 2,000 boxes of Girl Scout Cookies in the last two years alone.

"My secret is to use a lot of eye contact when I'm selling cookies and having lots of cookie booths," Vittoria said. "It helps to talk to everyone who walks by and not just certain people. And to be always be polite."
Girls Scouts have been selling cookies throughout the area from Jan. 19 through late February for $4 a box. The program is the largest girl-led business in the country, according to the Girl Scouts of America. The time spent organizing cookie booths and managing sales is designed to teach the scouts how to make decisions, manage money, develop people skills and to understand business ethics.

"Scouting has helped Vittoria develop as a leader, not just in scouting but in her own life," said Vittoria's mother Maria Flick. "Whether it be in school or other activities, she's active in our church and her leadership skills come out. You can see she's the type of child who's going to step forward and do anything that's asked of her. If she's not asked, she decides to go where help is needed, and that comes from being independent, which is a great aspect of Vittoria. She also has a kind heart and a lot of that comes from working with the Girl Scouts."

Vittoria is an independent Girl Scout, so she's not attached to any troop. With cookie sales through a troop, the proceeds go back to the troop where they decide as a group what to do with the funds, Maria said. As an independent scout, Vittoria still gets to do all of the activities other scouts do, but she gets to decide how proceeds from her sales are spent.

"As an independent scout, she can do everything a troop does, she just doesn't go to troop meetings, so it's a little bit of a different aspect that puts things more on her shoulders and makes her take on more of a leadership role," Maria said. "It's helped her build confidence and courage, that she can go out and do this on her own."

During last year's sales, Vittoria announced to her family that her goal was to sell 1,000 boxes to earn a destinations trip to Georgia to ride horses for two weeks. She ended up selling 1,200 boxes.

"We thought it would be nice if she could pay for the trip. We didn't pressure her to do it, but she was very gung ho about it and went out there and tried to hit that goal," Maria said. "At first we thought she was crazy, because she never sold more than 650 boxes before. When she figured out if she sold 1,125 boxes it would pay for the trip in full, we said sure, okay, we'll support you. We never thought she would hit that goal. We're so proud of her for picking that goal, carrying it out and surpassing it."

This year, Vittoria is looking to outdo her sales total from last year and is off to a roaring start. She's already sold over 800 boxes with two weeks left to sell.

"It's going very well, I have three more cookie booths to sell at and will try and sell the rest of the cookies at church or schools," Vittoria said.

For Vittoria, the work that comes with selling cookies and scouting is both rewarding and fun, as it allows her to expand her horizons.

"I really like being able to travel all over the place and learning about different activities I can do when I get older," she said. "It's also just fun getting to interact with a lot of different people."

Email ThisBlogThis!Share to TwitterShare to FacebookShare to Pinterest
Labels: Current Events, In The News