Local Girl Scouts did one minute of jumping jacks in Princeton on Tuesday, part of an effort to get 20,000 nationwide to do the same.

It’s about getting fit and having fun.

And 35 Princeton Girl Scouts did just that on Tuesday afternoon in the courtyard of the Princeton Shopping Center, joining a nationwide effort to break the Guinness World Record title for the most people performing jumping jacks in a 24-hour period.

The Girl Scouts did one minute of uninterrupted jumping jacks. 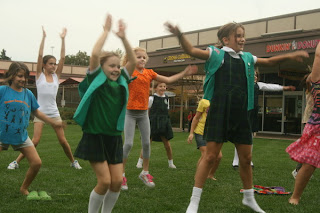 “I thought it would be fun for the girls to be involved with trying to break at Guinness World Record and to show the community some of the fun things Girl Scouts get to do,” Karen Freundlich, the volunteer service unit manager for the Princeton Girl Scouts, an umbrella organization for 25 different scout troops in town. 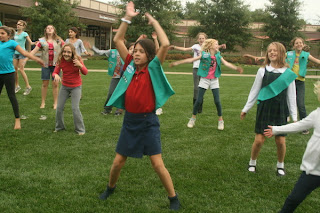 A timekeeper armed with a stopwatch timed the girls’ participation and the results will be gathered nationally to determine if the record was broken, although it will probably take a few weeks for the national results to be announced.

To break the record, more than 20,000 people must complete one minute of jumping jacks in events occurring between 3 p.m. on Tuesday and 3 p.m. on Wednesday, east coast time.

First Lady Michelle Obama kicked things off in Washington D.C. on Tuesday with one minute of jumping jacks, supporting her "Let’s Move!" campaign, which encourages kids and families to get healthy and active.